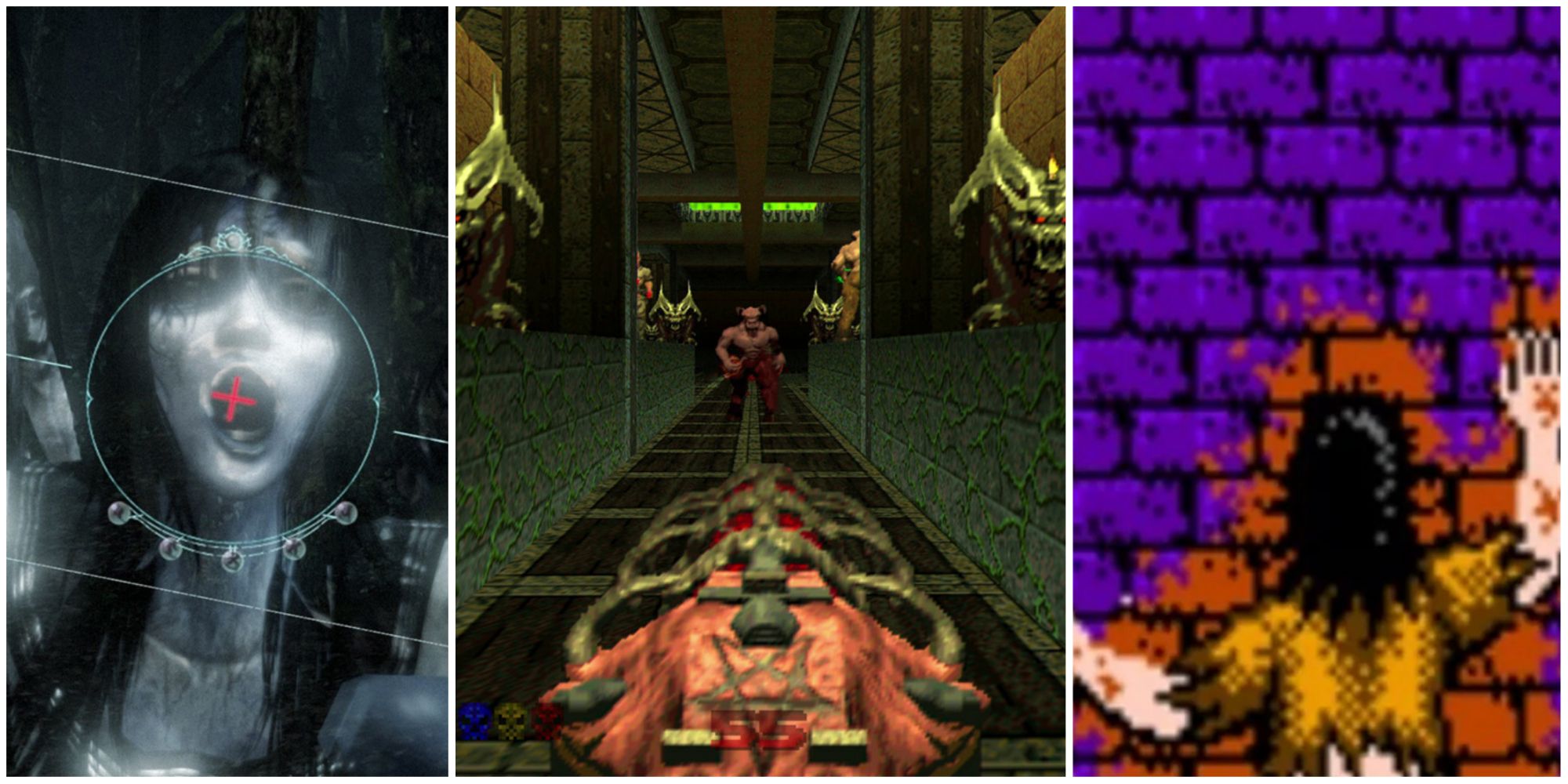 Nintendo is known for offering many games primarily aimed at children. A lot of the series they’re making now might blend into different genres, but they, for the most part, maintain an E rating. Nintendo is also one of the oldest gaming companies still alive and was very different.

At the time, Nintendo dabbled in many different types of genres and age groups, which led to the release of many horror games that were also exclusive to Nintendo’s console at the time. When creating horror games, Nintendo had gruesome bangers that still hold their own and inspire some modern titles.

Ju-On: The Grudge is a first-person survival game exclusively made for the Wii. This game is not the best when it comes to the controls as they may feel clunky and out of place as the calibration method has been changed by the developers. The controls ended up being terribly bad as some deaths will be caused by their error rather than the players.

Apart from the stunning controls, the game has some creepy scares due to the nature of Ju-On’s design. There will be times when the ghost chases the player in a way that feels like it’s leaping forward through space and time only to end up right in the player’s face.

Calling allows the player to use the Wii Remote as a phone that allows them to hear ghost conversations and teleport. The cellphone gimmick can be disabled, however, which partially kills what little the game has going for it. The story revolves around 4 people trapped in the mnemonic abyss which is a ghost realm.

Encounters with the game’s ghosts could have been done a little better as the Wii Remote only has to be shaken for them to come out of the player. Some ghosts, like the kids with missing eyes in the school biome, are scary to encounter. It’s a game with good scares brought on by mediocre combat.

Luigi’s Mansion 3 isn’t scary for most people in the way some games on this list will be, but then again, that might not be true for younger audiences. The game has creepy designs that don’t vary much in the game’s common enemies, but they still manage to stay interesting in their macabre structures and environmental properties.

The bosses are also all different, with one taking control of a giant T-Rex skeleton before showing off as gruesome.

Eternal Darkness: Sanity’s Requiem is an action-adventure horror game with fascinating gameplay mechanics that involve the player being thrown into different cursed bodies that are found in different time periods. The gruesome threats for each character come in different forms, like skeletal figures that appear to have dry skin to the bone.

The game also introduces a sanity meter that fills up whenever a player looks at a monster, which it will do a lot. When the meter fills up, the game starts to get more intense and will throw different challenges to the player that will make them question their own sanity in real life.

Fatal Frame: Maiden of the Black Water received a remaster for select modern-gen consoles, but the game originally started as a Wii U exclusive. The game contains many elements from the series’ predecessors, with the player having to face ghosts using his camera. This time, with the added motion controls, the danger feels more interactive.

RELATED: The Best Halloween Events Ever

The ghosts in this game have great character design as they each leave a haunting aura in the air when the player encounters them. The main problem is that there aren’t enough ghosts, which makes this Fatal Frame entry make the player want more. It looks rough but doesn’t take away from the scares as cutscenes and boss fights will continue to leave players terrified.

Clock Tower was first released on the Super Famicon in Japan, known as SNES in America. It was a point-and-click survival horror title in which the main character explored an orphanage while a killer was on the loose. The main killer following the player wields a giant pair of scissors and chases the player until either the player escapes or the little scissor man catches him and assassinates him.

The player is unable to retaliate as they have to run away, hide, or mash a button and hope it helps the scissor monster get away from the main character so she doesn’t get killed.

Geist looks like what FEAR aimed to copy. Indeed, the game plays primarily as a shooter, but has introduced plenty of horror elements into its mix. One of the most interesting parts of this game is that it is one of the few GameCube games to be rated M. The game revolves around the player using their soul powers while trying to stop an evil demon.

Players can own enemies and use them to eliminate enemy teammates or own animals to use their various abilities. Players will need to scare characters to weaken them and become possessed.

Demons include flaming skulls that will chase the player, goat-legged demons with large upper bodies causing terror, and much more. Doom 64 kept the series fresh with a few visual and aural changes but was able to keep gameplay similar to its predecessors so as not to alienate its original community.

Resident Evil 4 was originally a GameCube exclusive before being ported to other platforms. The game is one of the best in the Resident Evil series as the player takes on an escort mission, but unlike some other escort games, it doesn’t feel so clunky that it takes the game away.

Resident Evil 4’s main enemies, Ganados, are creatures with designs similar to zombies in that their flesh appears to be slowly rotting or their souls are dead but their bodies remain. Their appearance and ability to overwhelm the main character will scare players as they try to save themselves.

Sweet Home was one of the very first survival horror games. At the time, it was actually too horrible to transfer to America from Japan. The game is very much like a turn-based RPG, but instead of tackling the usual fantasy RPG themes, it embraces the survival horror genre.

Players will need to scour areas for materials so they can keep their party alive while uncovering a mystery that surrounds the haunted house. It’s a game that has done a lot for gaming because it’s also what inspired the creation of the Resident Evil series. It’s not scary in the traditional sense, but gives players a strong dread throughout.

NEXT: The Scariest Levels In The Game