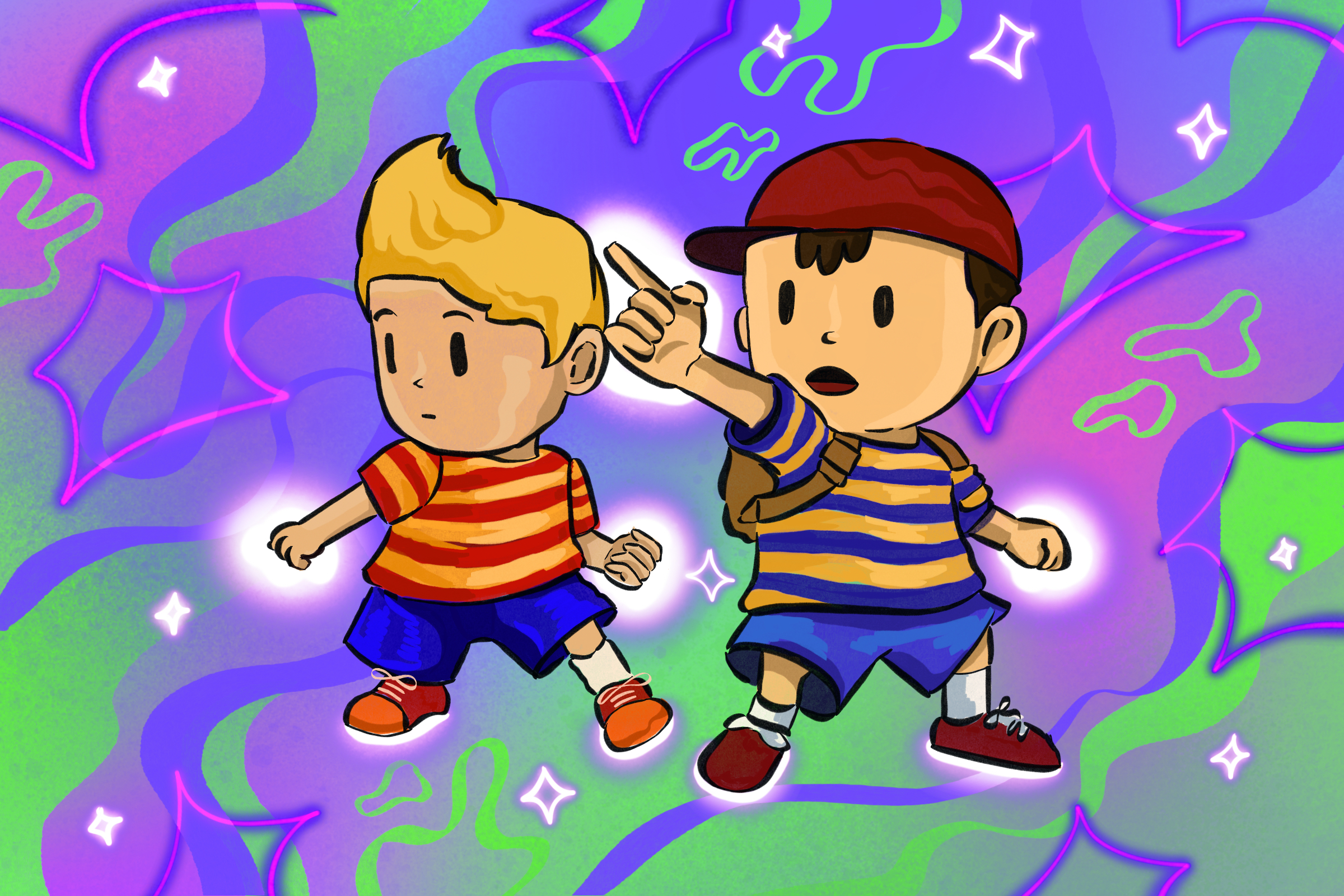 Although the last Nintendo Direct on February 9 was quite divider, there was one game that stood out to me above all others – and it’s almost two decades old. “EarthBound” was originally released for the Super Nintendo in 1994 for lukewarm reception, but it influenced countless games and earned its cult classic title.

To the unfamiliar, “EarthBound” might look like a kid’s game or any other old RPG. The original marketing campaign also did not contribute to the success of the game, boldly claiming “this game stinks” and including scratching and sniffing on the ads. However, the surreal and chaotic satire of Western culture has stood the test of time and remains as bizarre and hilarious as it was nearly 20 years ago.

“EarthBound” features Ness, an average 13-year-old curious about a meteorite that landed near his house. After hearing about a prophecy that a boy and his friends will save the world from a mysterious villain named Giygas, Ness embarks on an epic quest to fulfill it.

The game revolves around Ness traveling to new towns, occasionally finding new party members, defeating local baddies, and leveling up. Along the way, Ness faces plenty of random encounters, wacky side characters, and weird areas to explore with plenty of hidden nooks and crannies. In order to defeat Giygas, there are melodies Ness must record, but to obtain them he must face endless obstacles, including his own mind.

Everything about the game is sleek, surprisingly 1960s-inspired intricacy soundtrack to his clever puns and nostalgic evocation. The pixel art emphasizes the goofiest parts of the game, but also creates surreal and bewildering backdrops for enemy encounters. Some enemy sprites are very detailed, showcasing the gears of a human-tank hybrid, and others are simply a plant with two leaves and legs. Each non-player character (NPC) is unique in appearance and speech, adding depth to a deceptively simplistic world.

The variety of enemies keeps the already incredible combat refreshing, even amidst the grind. Yes, the game requires the player to go out and deal with random encounters before moving forward, but there are key aspects of this loop that make it less cumbersome than the vast majority of role-playing games ( or RPG) modern turn-based. Unlike other games in the genre like “Pokémon”, the game never forces you to fight with such low level enemies that they are a waste of time. You also have the option to defend yourself or flee from a fight, which makes combat more strategic than just ripping an enemy to pieces. The health aspect of battles is also unique, as your hit points gradually decrease, making death avoidable if you’re quick enough.

If this all sounds familiar, that’s because it absolutely is. “EarthBound” has been called one of most influential games of all time through its desire to reinvent the genre. In the pre-“EarthBound” world, RPGs were rarely set in a modern era or setting, instead opting for fantasy tropes. The games just weren’t that… weird. Rather than fighting a mighty king or a vengeful wizard, I found myself subduing sentient trash with a baseball bat. This prophecy at the opening of the game? Yes, this was spoken by a talking bee named Buzz Buzz who traveled from the future. Not to mention quirky little details like “oh, baby” that pop up every time a character levels up or the Blues Brothers-inspired musical sequence. Countless games have been inspired by these details and systems, from “Undertale” to “Eastward”.

There’s also a heavy dose of puzzles to solve from area to area, and the game never tells you exactly what to do. In fact, Nintendo sold every copy of the original game with a player’s guide full of hints and vague instructions. If puzzles aren’t your thing, Nintendo has the complete guide online for free, but as a sucker for puzzles, I reveled in my own confusion. Will the rule taking inventory space be useful 10 hours later in the game, or have I just spent my precious money on garbage? I’ll never really know until an optional NPC needs a measure, but that entirely depends on who I’m talking to and when. “EarthBound” is a game that refuses to hold your hand and is as much about your investment as it is about following the main questline.

The game is also a stimulating reflection on childhood, power, corruption and the dark parts of the psyche. Although Ness and her team are only children, they are the only ones who can save the world, not neglectful parents, cult leaders or mysterious gangsters. However, they must first deal with xenophobia, violence, PTSD and other conventionally “adult” concerns. The story’s beats are perfectly placed to provide comic relief when needed, but also raise the stakes by exploring the ugliest parts of society through the eyes of adolescence.

I had never heard of “EarthBound” until about two years ago, when I saw requests for an actual “Mother 3” port (the Japan-exclusive sequel). Despite the absence of “Mother 3”, Nintendo’s decision to put “EarthBound” and its prequel “EarthBound Beginnings” on the Switch reignited interest in the game and introduced younger generations to the iconic series (myself included ).

My journey as Ness has been nothing but entertaining, even when the only way forward is to put in hours of work. Every part of the game, from its looks to the extremely well-written story to the surprisingly unique gameplay, is an absolute treat and way ahead of its time. Giygas isn’t the only time traveler – the game itself feels like he was sent from the future. It’s hard to find a game as special as “EarthBound”. If you’re looking for a cult classic that will have you laughing, crying and saying “fuzzy pickles,” jump into the weird world of “EarthBound” on the SNES Nintendo Online app.

Sunbreak should avoid landing too close to Splatoon 3