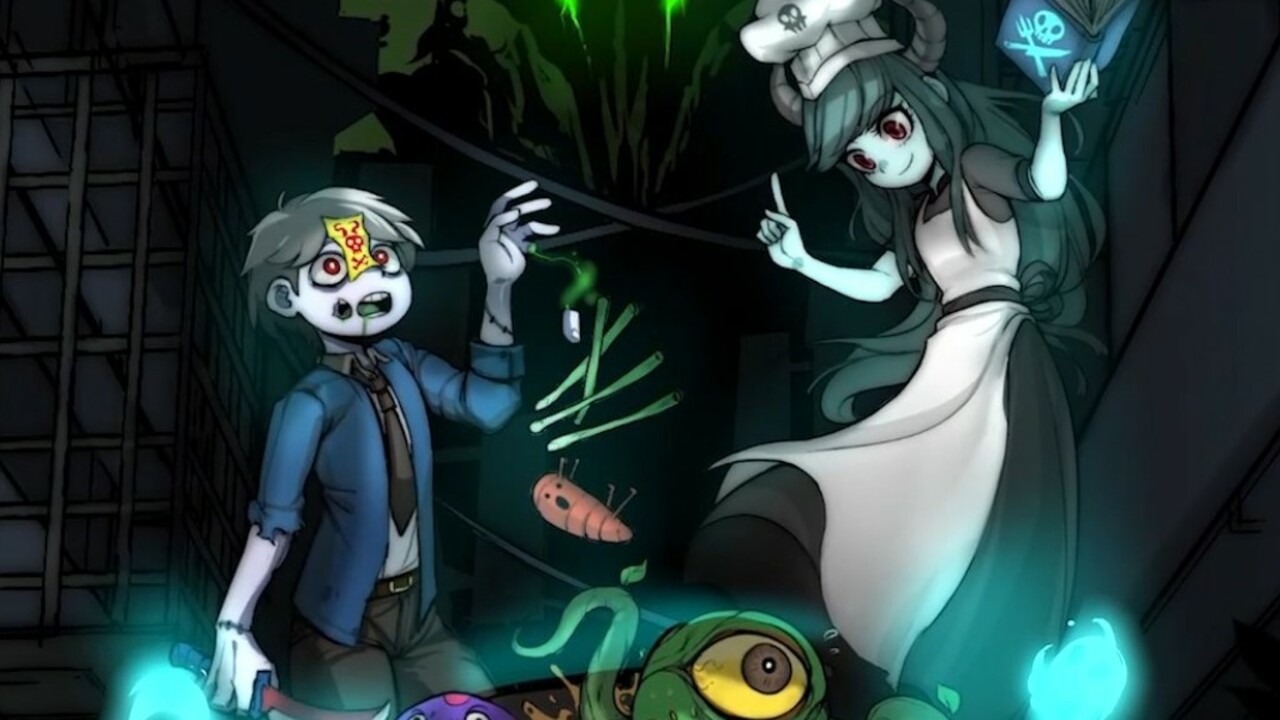 There is a lot of debate these days about what constitutes a “complete” game. Is a game finished when it launches, or does it only cross that threshold when the developer finally stops updating it? If it’s neither, how many updates or how much content needs to be added until it’s done? What about when a game is â€œfull contentâ€ and new updates only deal with minor balance or performance tweaks? Such a debate cannot really have clear answers, as it really depends on each unique case. One thing is certain, however, is that Dungeon Munchies is not a complete game. That’s not to say it’s a bad game, or that it won’t turn out to be a good game in the end, but there’s a distinct feeling here that you’re playing a game that kinda came out of the oven this early on.

First of all, an important context. Dungeon Munchies was originally revealed on the Indie World Showcase in December 2021, and it was released on the same day. To most viewers, this would seem like another neat and original independent RPG, and in many ways it is, but some critical information has been left out in this part of Direct. As it turns out, Dungeon Munchies started life in 2019 as a Steam Early Access title and at the time of writing, it still hasn’t left Early Access. So what we have here is a game that we are still actively working on, even if it is presented as if it is complete. Again, that’s not necessarily a bad thing, but it does seem a bit devious considering Dungeon Munchies is very feels as a game still in beta. 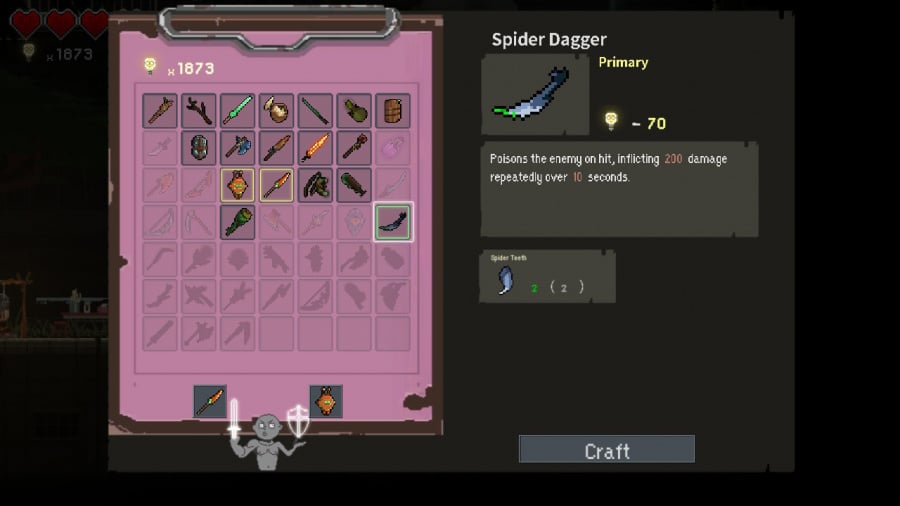 We’ll start with the good news. Dungeon Munchies places you in the role of a zombie animated by the ghost of a necromancer named Simmer. Simmer was obviously an excellent cook during her lifetime, and she simply refuses to die until she can raise a protÃ©gÃ© who she believes can adequately continue her legacy of preparing great food. As it turns out, sourcing most of the materials for his dishes requires you to battle all manner of food monsters and mutants, so you embark on an adventure through a grimy underworld in search of recipes and ingredients. to build your kitchen insight.

It’s a fun premise from the start, and it’s written with a lot of humor and wit throughout. It turns out that most of the foods you are looking for are not a huge fan of your voracious eating habits, so you will often be berated and debated by all kinds of fruits and vegetables that resist your efforts to become a worthy cook. Simmer’s legacy. This moment-to-moment humor is convincing enough, although the underlying story sadly rarely lives up to it.

You are rarely (if ever) given a reason why you are at this weird resort, so you sort of drift from place to place because there is nowhere to go and not for reasons. concrete stories. What obviously Assumed feeling like a big connected complex quickly becomes a set of levels that are just thrown at you one after the other. This lackluster story isn’t too negative, though, as it is primarily a gameplay-focused action platformer. 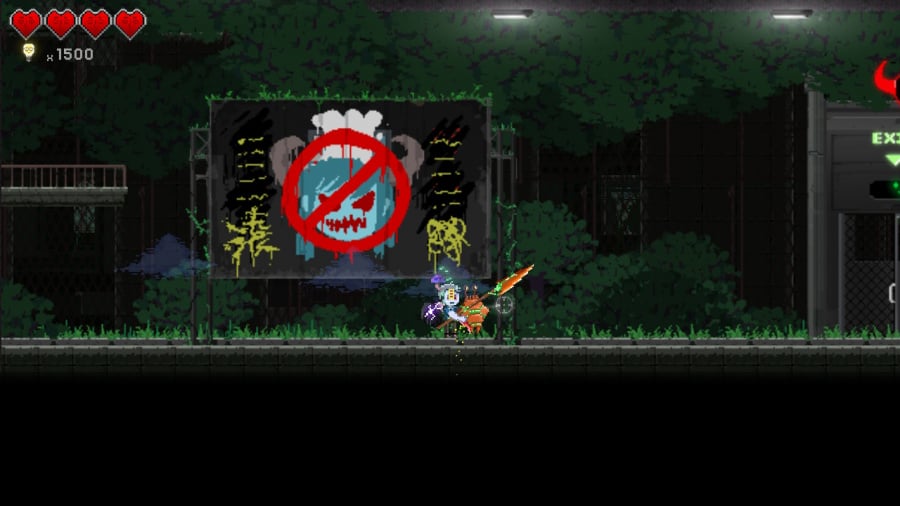 The problem, of course, is that the gameplay isn’t that great either. The typical flow of a level consists of a platform through a series of claustrophobic tunnels filled with various creatures and foods that you battle in simple action battles. Every once in a while you come across a camp that gives you a chance to heal and modify equipment, and then move on to the next challenge. Think about dead cells, but just path less polite.

The first problems arise with the movement, which feels far too loose and shoddy for a game that often demands precision. Jumping between narrow platforms or around harmful spikes can often be an exercise in frustration, as your zombie doesn’t always go where they think they should. Sometimes you land on a platform and then slide off to the side. Sometimes the arc of your jump is weirdly short. Sometimes your double jump just doesn’t work. You never feel like you are in total control of your zombie, and this can lead to a lot of times when mistakes just don’t seem deserved.

Beyond that, the combat is relatively shallow and doesn’t feature the kind of visual feedback you’d expect. You can dodge the roll and use various equipment like swords, bows, spears, and shields to take down your enemies, but combat is often a confusing and rather unsatisfying amalgamation of effects and attacks. Your attacks do not flinch enemies or react in any meaningful way, and enemy attacks do not produce any kind of effects or stun reactions in your zombie. So combat feels stilted and unnatural as you trade blows and watch the same extremely basic attack animations play out as the health values â€‹â€‹slowly drop. 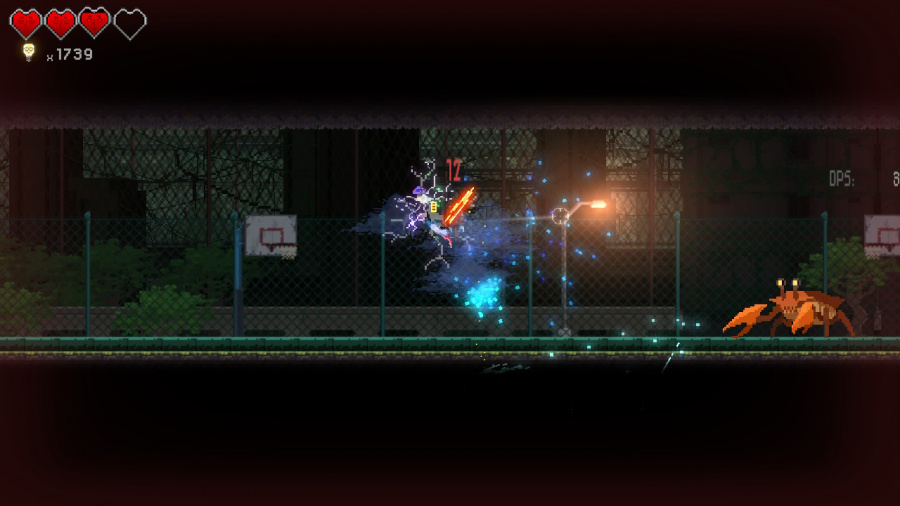 Downed enemies will often drop gifts, and these can then be brought back with you to a checkpoint where you can then convert them into food or gear to give you an advantage in battle. It’s a rote crafting system that you’ve seen a billion times in games before, but it introduces some necessary variety into fierce combat. Food is especially great because you can only have seven pieces of food in your stomach at a time. They stay there indefinitely, but you can change them at any time in the camps to give you new effects. For example, you might no longer need this poison effect on your attacks and replace the food with something with a passive regeneration effect. Food allows you to create sweet ‘constructs’ for your zombie, and unlocking more as you find new types of ingredients gives you more potential options. So this food system helps make combat a bit more dynamic as you can introduce new effects over time, but this rather basic crafting system can’t do much to save the generally weak combat.

As for its presentation, Dungeon Munchies definitely leaves something to be desired here. We think special mention should be made of the appalling performance, which can often hamper already poor gameplay. It looks like Dungeon Munchies is aiming for 30 FPS, but it dives and soars depending on what is happening onscreen, and that may confuse you a bit. There have been many instances where we have encountered lost frames that caused the game to misread our entries and cause us to miss a platform or roll too late to dodge an attack. For a game as visually straightforward as Dungeon Munchies, this is simply inexcusable.

Meanwhile, the visuals are decent, although the overall effect is once again underwhelming. On the one hand, there’s nothing quite like cool backgrounds or adjusted color palettes to significantly differentiate areas from one another, so it feels like you’re walking around. a very long and very repetitive cave. Worse yet, it feels like there are a lot of animations that are justâ€¦ not there. For example, you get the option to jump to the wall after defeating a certain boss, but when you actually do this maneuver, your zombie just keeps the same basic basic animation as it floats / awkwardly jumps to the side. It’s a shame too, as a lot of the sprites are drawn in pretty detail and look really great, but the overall art direction is just plain lackluster – at least at this point.

Dungeon Munchies is the kind of game that craves it could be able be good in two or three years. Despite the shoddy visuals, appalling performance, sloppy movement mechanics, and unoriginal crafting systems, it feels like there could be a good game somewhere here. With a few tweaks, this combat system could be promising, and the main loop of craft â€” combat â€” rehearsal seems like an interesting riff on the main idea of â€‹â€‹Monster Hunter. Sadly, that potential hasn’t fully presented itself here yet – this is an Early Access release with all of the issues and lack of cohesion that this entails. We recommend that you ditch Dungeon Munchies and suggest that you look into Dead Cells or Dragon: Marked for Death instead. There are a few quality traits here, but that’s not enough to redeem Dungeon Munchies.