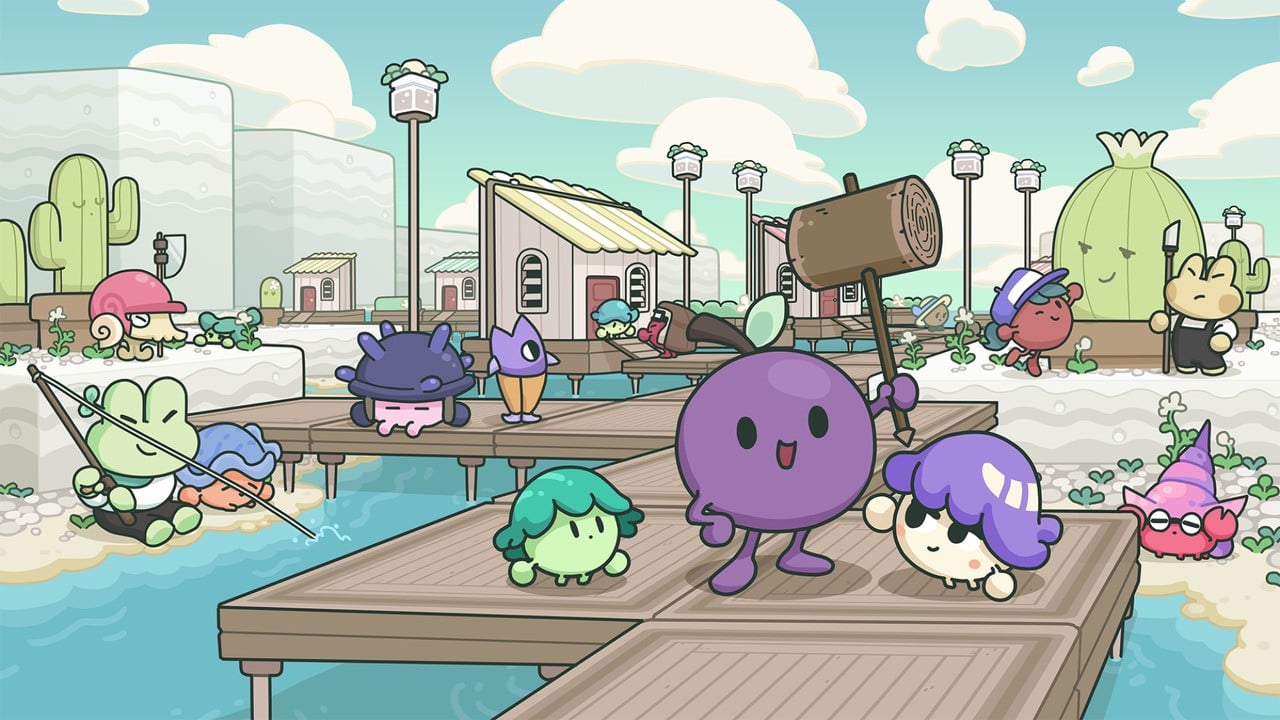 Games often focus on escape, and Garden Story offers another way to get lost in the virtual world: the protagonist hero is a grape, charged with a great goal. Concord (see what they did there) is just a youngster, snatched from kindergarten to fill the role of caretaker after their predecessor decides to leave town – a role that will require them to defeat the insidious rot that has infested the earth.

The Grove, where Concord lives, is divided into four seasonal towns: Spring Hamlet, Summer Bar, Autumn Town, and Winter Glade, but rot has affected each of these towns differently and you will need to visit them in turn. to repair damage caused by rot.

See, Garden Story may appeal to you with its Harvest Moon and Stardew Valley-type aesthetic, but this game about community and saving the world turns out to be an RPG in simulated farm clothes.

Little Concord can unlock and upgrade a variety of weapons, from the standard sword-like pick to the wide area-of-effect hammer and dowsing wand, which serves as both a fishing rod and a ranged weapon. The potion system is also relatively complex, with different types of “Dew” that offer varying buffs as well as healing some of your HP, and even different bottles varying both in the time it takes to use them and how much dew they can hold.

The skill tree is also unique: rather than letting Concord get permanent upgrades or level up through experience, Concord will instead unlock “Memories” and “slots” in which to keep them. Memories are linked to old Guardians, and are usually something like “Drink [flavour] Dew 10 times “or” Defeat 25 Slimes “, and there is also a bonus for discovering each guardian’s grave. You can change them at any time – some will help you find rare materials, used to upgrade tools and dew bottles, and others will add additional stamina or health points to your various bars.

The quest system is actually quite similar to Stardew Valley’s “Help Wanted” requests: every morning two or three new daily quests are added to the village bulletin board. These are taken from a list of many and broken down into three categories: defeating monsters, fixing things, and gathering resources. Each of them has their own experience bar – completing the requests will earn you XP in each one, and leveling them will unlock new monsters and tools in the village. They can get a bit repetitive, but by this point you’ll probably be level enough that you don’t have to worry about them anyway. 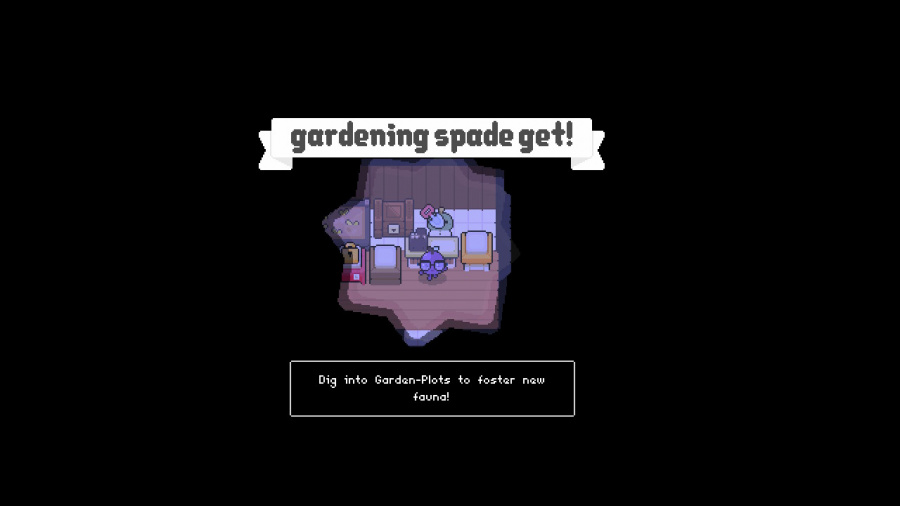 At the end of the quest for each village, you will need to explore the dungeon and fight the boss at the end. Each dungeon has a different theme – one town’s dungeon is a sewer with a Rotberg problem, another is a bookworm chewing up a library – and although the first boss is MILES harder than the others, they were all pretty fun. The dungeon puzzles were still difficult, however. Or maybe we’re just not smart.

The Grahm Nesbitt soundtrack, which takes place in the background as you explore, is very sunny, jammy, and enjoyable, fitting in alongside Stardew like something we’d listen to in the bath (we promise , that’s praise. We love bath music). And the game – as you can see from the screenshots – is charming, as long as you have a soft spot for its art style; there’s a lot of adorable attention to detail, and the color scheme is perfect for the relaxing crowd.

But the main problem with Garden Story – like many RPGs – is that it runs out of steam a little too quickly. Once you reach a certain point, maybe the third or fourth city, you will probably find that the weapons you use the most are completely leveled, and you can’t worry about doing the grinding necessary to level the others. just in case. Enemies never get much tougher, despite the appearance of more interesting and challenging variants; you’ll probably have enough HP by this point (and stacks of dewy bottles) that you can just make your way through. 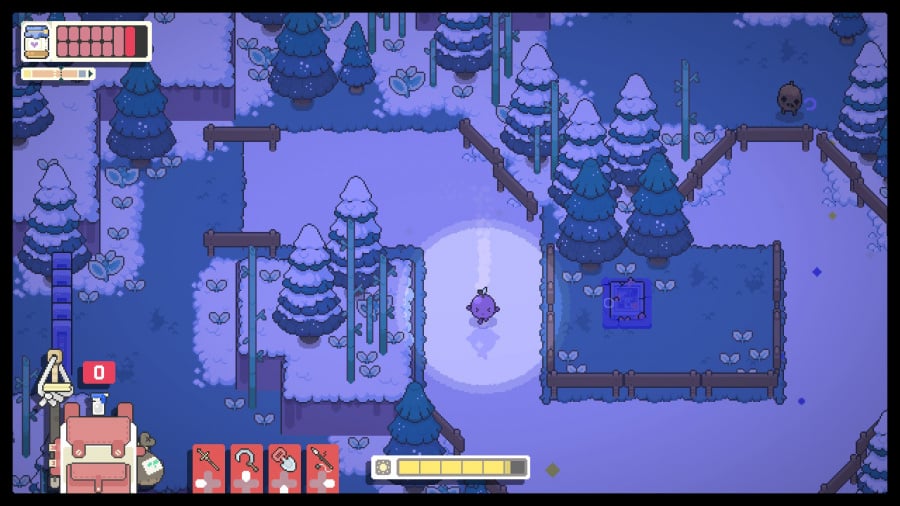 The “Memories” you have equipped are also likely to be locked: it is much more useful to have two extra health and a faster stamina recharge than to have a minor buff that activates when you drink a specific dew type, so the fun of re-equipping your character building is greatly mitigated by the unevenness of memories.

And while we liked the systems in Garden Story a lot, we hated inventory. Of all the things you can improve, how about Concord’s pockets? Instead, players are limited to 25 slots (in a game with a lot of resources) and items not stack. However, they do stack up in the Village Inventory, a box that can be found all over the map, where Concord can store his extras. However, they only stack at 15 which is a bit arbitrary, especially when trying to collect 15 of something for one upgrade and 8 of the same for something else.

This, in a nutshell, is our second big Garden Story criticizes: he has some really neat and unique ideas, and then ends up bringing them to their knees for no reason. The build / craft system is cool, but it’s limited to VERY specific areas on the map, and it’s mostly decorative. Likewise, the dress system is completely cosmetic – it even says “cosmetic only” on everything including backpacks (WHY). Additionally, there are items you get that end up having almost no use, as far as we know, which feels like a missed opportunity. 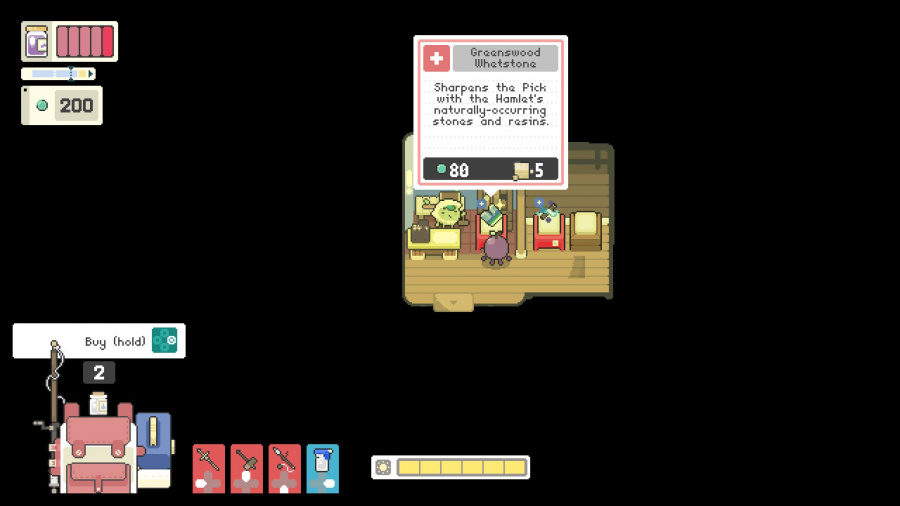 The quest system, which makes up most of your daily activities, needs to be accessible from the bulletin board, and it’s hard to remember where they are, as the map won’t tell you – a problem that will arise later. with fast travel. and other points of interest. And the day / night cycle, which seems like an incentive to get things done and then go before the creepy night monsters appear, ends up being a bit toothless when you find out that at night. never ends, and so there is no rush like Harvest Moon to get home before passing out.

Corn. CORN. All this just bitching really settles down when you play the game, like we did, for hours every night. We were totally addicted, to be honest. Sure, it’s frustrating to be stuck with collecting gear, but there are so many other things to do once things open up. Gardening, fishing, fighting, talking to the villagers – Garden Story may be a little superficial, but it makes up for it in its scale.

Unfortunately, we weren’t able to completely complete the game. We made it through to the last boss fight before a fatal error took us back to the Switch dashboard – we’re pretty sure the next patch will fix it. that. However, the fact that we’ve come this far and enjoyed around 85% of what the game has to offer is still worth a lot. Like a cozy old sweater that has a few holes in it, we can’t help but love Garden Story despite the weird imperfections.

A new model is for sale in Australia, let’s see if any changes are found