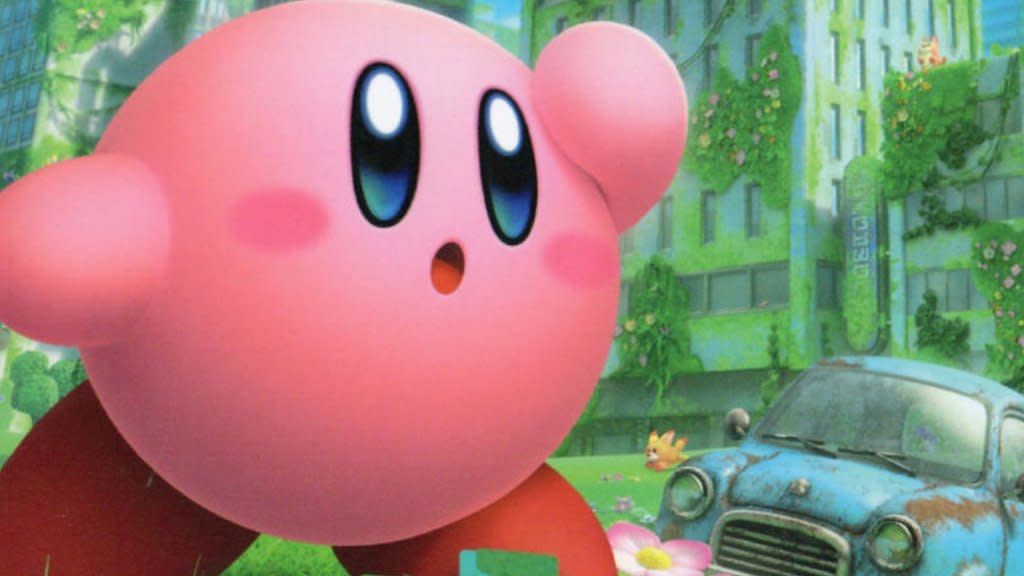 Parental and political outrage over video games such as Mortal Kombat, Wolfenstein 3D, and Night Trap made 1992 one of the most controversial years in video game history.

However, it was also the same year that one of the most family-friendly faces in the video game world was born: Kirby.

The unique big-eyed pink ball is still featured in chart-topping titles, 30 years after the original game was released.

For Eliza Sharp, founder of online fan account Kirby Kirby Informer, the character has stood the test of time because her games stand out so much from the competition.

“Each Kirby game has its own little gimmick, but it makes them different and unique from each other,” she says. “It draws me in and makes me excited for the next title in the series.”

These have included a robotic costume or the character teaming up with animal friends like a hamster named Rick.

Eliza’s introduction to the franchise came thanks to her older brothers’ copy of Kirby: Canvas Curse on the Nintendo DS and says she “basically fell in love” with the character from the start.

Kirby is popular for a multitude of reasons, from its music and family appeal to the variety and consistency of games spanning three decades. Plus, as Negative World noted, “Kirby has a great design. It’s expressive, iconic, instantly recognizable, and easy for kids to draw. A perfect fit for the protagonist of a Game Boy game. It’s simple, but it works extremely well. .”

Although Kirby games are generally the same all over the world, there is a marked difference in marketing and promotion in some regions, especially between Japan and America. The most noticeable change being that the character usually smiles in the cover art of Kirby games in Japan, while in America Kirby has an angry expression.

In an interview with Gamespot, Kirby: Triple Deluxe director Shinya Kumazaki explained that, for the Japanese version of the games, “the most powerful image of Kirby is this cute image, we think it’s the one that appeals to the widest audience”.

Kumazaki suggests Kirby’s cute images “attract the most people to play” in Japan.

The game’s developer, HAL Laboratory, is involved in all aspects of the games, including packaging, according to Kumazaki. However, Nintendo of America has the final say for the US market. Kumazaki says that a “tough Kirby who fights really hard is a more attractive sign of Kirby, so that’s what we’re showcasing in the United States.”

The character was first seen in 1992 in Kirby’s Dream Land on the Nintendo Game Boy.

Created by Masahiro Sakurai, the character was known as Popopo during development, with the famous design being just a placeholder at the time.

It’s believed that Super Mario creator Shigeru Miyamoto originally wanted Kirby to be yellow, but Sakurai intended the character to be pink.

When Kirby’s Dream Land was released in North America and Europe, its color had yet to be confirmed to Nintendo colleagues in the West. And with the original Game Boy visuals providing no clues, they had no idea what color it was supposed to be.

They opted for white, which it appeared as on the original title cover and game cartridge. By the time the next game in the series was released, Kirby had his now-famous coloring.

He was seen as pink in Kirby’s Adventure, while Sakurai and his team also added the crucial “duplicate” function in which he could mimic other characters’ abilities.

In total, there have been over 30 Kirby titles over the past 30 years, cementing the character’s status as a video game icon. Creator Sakurai only made a fraction of Kirby’s back catalog, but he voiced the iconic antagonist King Dedede in Kirby 64: The Crystal Shards.

Although most Kirby titles have been well received and praised for introducing new elements, some games in the series have been criticized for being too simple to complete.

With the inclusion of computer-controlled characters who work alongside the player, Kirby Star Allies, released for the Nintendo Switch in 2018, was met with criticism from critics like Alex Huebner at iMore.

“While playing a Nintendo classic is always enjoyable, Kirby Star Allies seems to be a bit too easy,” Huebner wrote. “There are elements that make him interesting enough to keep playing, but I wouldn’t consider him a first choice.

“The ease of the levels was disappointing. I was hoping for a classic Nintendo challenge, and instead it felt more like hands-on. While this might be great for young kids playing, it doesn’t give much- long-term thing. Kirby fans who are more skilled.”

Others felt that there was less to explore during levels compared to previous titles. However, the game was widely praised for its local multiplayer co-op element.

Following the release of the latest installment – Kirby and the Forgotten Land on Nintendo Switch in March 2022 – video game journalist Ash Parrish of The Verge felt that while fun, it also lacked real substance, comparing it to Daddy’s beard.

“There’s a cotton candy allegory to draw here,” she said. “Just like carnival confection, Kirby is fluffy, cute, pink and very sweet. It looks appealing and is so much fun to eat, but the minute you put it in your mouth, it dissolves. Gone if quickly, you barely noticed it was there.

“That’s what it’s like to play Kirby and The Forgotten Land; fun for the time being, but without any real substance. And that’s okay – the surgically deployed cuteness of Kirby and the Forgotten Land is more than sufficient to overcome its relative emptiness.”

In an interview with Game Informer at E3 in 2011, Miyamoto confirmed that an American lawyer had partly influenced his decision when choosing the character’s final name.

Miyamoto, who got to know the attorney during the trial, said Kirby was on a list of names they were looking for for the character. When downsizing, the team liked the idea of ​​the two having a connection.

The other element of the name is that, according to Miyamoto, cute characters in Japan often had very sweet names, and he thought “Kirby” sounded harsh.

The legendary game designer recalled how he found the juxtaposition of a cute character with a “very funny” harsh-sounding name and thus, Kirby was born.

Over the years, the series has expanded beyond video games with an animated television show called Kirby: Right Back at Ya!, as well as several comic book series.

Eliza thinks Kirby is unlike any other video game protagonist, and the character had a pretty big impact on her while she was growing up.

“I would play with him in Smash Bros as much as I could, try to play my brother’s games, and play anything that had Kirby on it,” she recalled. “Overall, he would just make me happy and he would be my safe place.”

With competitive sales figures and generally positive reviews, the latest title in Kirby’s series held off other big Q1 2022 releases, such as Horizon: Forbidden West and Elden Ring.

This suggests that one of the oldest characters in gaming is still as versatile and beloved as ever. However, in an increasingly competitive landscape, Kirby will have an uphill battle to remain popular and engaging for another 30 years.