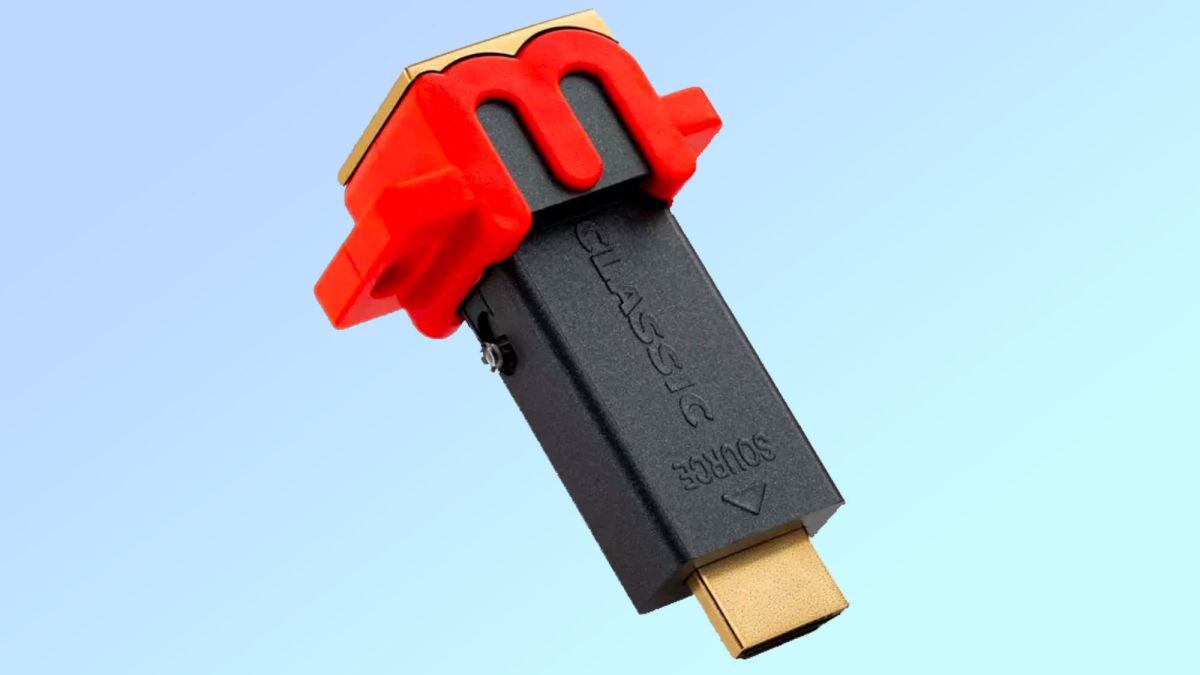 Metroid Dread is easily one of the best Nintendo Switch games to release in 2021. The fast-paced side-scrolling action paired with its deep labyrinthine world makes it a gripping experience all the way through. Unfortunately, due to the aging of the Nintendo Switch hardware, developer MercurySteam had to make some graphics cuts to ensure the game could run at 60 fps.

This meant reducing the resolution to a measly 1600×900 when docked without anti-aliasing. On larger 4K TVs, this leads to blurry textures and jagged edges, which doesn’t indicate a major release in 2021.

Personally, I haven’t experienced the game that way. And no, I did not emulate the game on PC like others have done. My game configuration integrates the mClassic ($ 79 on Amazon), a small HDMI converter manufactured by the American equipment manufacturer Marseille Inc.

The device looks like an unpretentious streaming stick with a giant “m” logo protruding from the back. It connects to the back of a Nintendo Switch or any device with an HDMI output, and converts outgoing video while adding an anti-aliasing layer on top. In my setup I have it at the output of an HDMI switch so all my retro systems can have a little graphics bump.

I had been using mClassic for about a year on my LG OLED C9 55 “TV. It’s a great TV, but at 3840 x 2160 resolution, content at a smaller scale can end up looking blurry. games like Animal Crossing: New Horizons or Splatoon 2, my eyes turned to the smoother edges that mClassic was helping to produce.

It was while I was at a friend’s house that I noticed how blurry and jagged Switch games looked on a 4K display minus the mClassic. My friend sports an LG OLED as well, which makes it an equal comparison for my eyes.

Seeing some non-mClassic gameplay, I told him to consider buying the little red and black device. But he declined, saying he didn’t play the Switch often enough and that the $ 99 price tag wasn’t worth it for such a subtle quality change. I couldn’t blame him. Racking up an extra $ 99 cost for a $ 300 gaming system is a lot. However, the mClassic is often on sale for $ 10 to $ 20 off.

Either way, the difference for me when playing Metroid Dread was big enough that side-by-side comparisons had to be made.

Below is a video of Switch gameplay comparing the mClassic when it’s on and off. The effect is most noticeable on a large 4K TV, but the video should show what I mean. Make sure to zoom in and watch it in 1080p.

The beginning of the video shows the menu screen of my Nintendo Switch OLED. Take a look at the logos for No More Heroes: Travis Strikes Again. The lettering when the mClassic is turned off is significantly more blurry than when it is turned on.

The next scene shows Samus Aran in his ship with the camera zooming in closer to his helmet. Here, if you look at the edges of its visor when the mClassic is off, there’s a shimmering effect that occurs, almost as if the pixels are dancing. This is due to the lower resolution and lack of anti-aliasing essentially showing the corners of each pixel. When mClassic is activated, the effect is less noticeable.

A later scene shows Raven Beak, the main antagonist of Metroid Dread, holding Samus by the throat. We’ve added an image slider below for easy comparisons. Here, if you look at the edges of Samus’ calves and hips, his armor doesn’t look entirely round and smooth. You can also see more jagged edges around his shoulder pads and at the top of his helmet. For best results, try zooming in on your phone or computer.

A similar effect can be seen in this scene, with Samus slumped to the floor after meeting Raven Beak. Again, zoom in for best results.

Here there is a general vagueness for Samus. Look at the areas where blue meets white on his armor. There is a light smear on the image. And take a look at the orange glow of its arm cannon. When the mClassic is turned off, the light source appears angular, as if it came from a 3DS game.

As you move the slider below to the “on” position, there is a noticeable resolution bump around Samus. The colors stand out a bit more and there is greater overall clarity. In addition, the orange lights on his handgun do not stain the rest of his weapon.

The jagged edges are especially noticeable in the slider below, where Samus is seen examining his costume after meeting Raven Beak. Pay attention to the round areas of Samus’ armor, like his shoulder pads and helmet. The silver lightning bolt image on his shoulder pads is noticeably sharper with the mClassic.

And in this gameplay scene below, Samus looks more out of focus with the mClassic off compared to when it’s on.

Hopefully the clip and image sliders above help better demonstrate what the mClassic can do for lower resolution content. As for the actual game, I noticed no lag or latency issues. Metroid Dread, Splatoon 2 and Super Smash Bros. Ultimate are just as smooth with mClassic off as they are with.

Whether the mClassic is worth the $ 99 (or sometimes $ 79) price tag depends on individual preferences. I bought it for $ 90 earlier this year and noticed improvements in a lot of classic games, such as Wii titles running on Wii U. In this case, the Wii U is doing its own scaling. internal Wii games, then the mClassic adds another scaling layer on top. Playing the Wii Wario Ware: Smooth Moves game on Wii U with mClassic looks remarkably brighter and cleaner than playing on a Wii alone.

For some, the price of the mClassic is too high considering the improvement in image quality. For others, especially videophiles like me who are constantly on the lookout for the best quality output, this is a must-have.