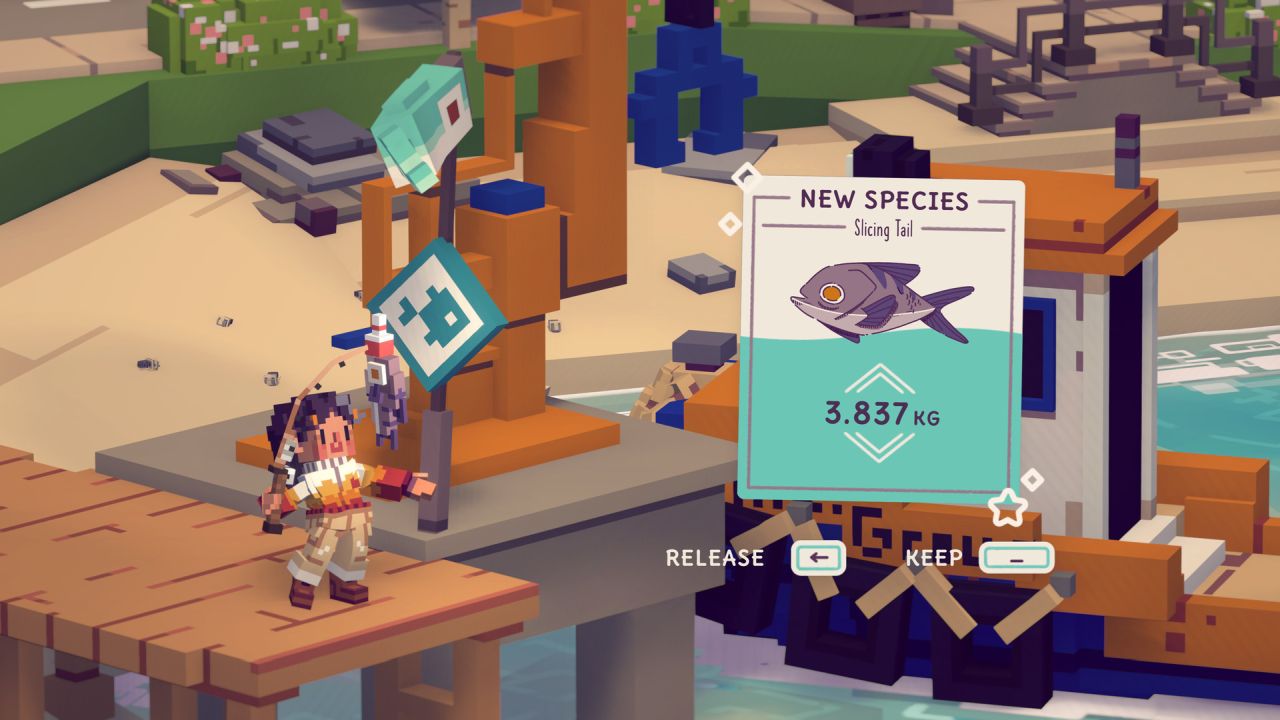 While I’m still heavily invested in life simulation games whenever I play them, it’s been a long time since I’ve indulged in them. Animal Crossing: Wild World on the Nintendo DS played a big part in my formative gaming years, as did Harvest Moon and the long-forgotten but still enjoyable MySims series. Since then, however, I’ve barely given games cut from the same cloth a chance, opting to watch new Animal Crossing and Stardew Valley releases from afar. After seeing Moonglow Bay with its sleek voxel art style and peaceful fishing gameplay paired with an emotional tale of loss and recovery, I knew it was time for me to immerse myself back into the genre I had initially dived for hundreds of hours.

Unlike most life sims where you’re a single young adult and new in town, Moonglow Bay puts you in the shoes of an older person. After choosing the appearance and preferred pronouns of your protagonist and his partner, you quickly learn that the two have moved from Ontario to the quiet and picturesque Canadian coastal town of Moonglow Bay to live out the rest of their days together.

Residing in Moonglow Bay and helping to restore its ailing fishing business is your partner’s dream, and being the good life partner that you are, you choose to join them on the journey. While they’re more than willing to help your soul mate fish, the residents of Moonglow Bay would rather do just about anything else, as the tales of creatures that call the bay home scare them too much to care. .

The opening moments are particularly wholesome and emotional, which makes things even more heartbreaking when the game jumps three years into the future, revealing that your beloved partner has been missing for over three years. They’re officially declared dead, and your character is clearly a wreck, with countless fast food containers littering the house. It’s not until your daughter arrives that you finally begin to break free of your depressing funk, forcing you to open the gift your partner gave you when you arrived in Moonglow Bay. The giveaway was a fishing journal, which turns out to be all the inspiration you need to rebuild your life and help reinvigorate Moonglow Bay, while launching a street food stall that will house dishes made from the ingredients. that you catch. the water.

Moonglow Bay does a fantastic job of setting the story for the gameplay loop that follows, letting you become emotionally invested in your character’s quest to fulfill their deceased partner’s wishes. The narrative throughout the rest of the game never gets that interesting, but the story does a decent enough job of being quite enjoyable throughout, instead opting for its gameplay to do the heavy lifting.

It looks very pretty though, with its particularly appealing Minecraft-eque voxel look. The soundtrack is also top-notch, offering relaxing tunes that suit what is a calm and serene adventure.

While you’ll spend much of your time in Moonglow Bay walking around the town and chatting with the locals, the majority will be spent in your boat known as “The Two Cats”. You can use your fishing rod on land to catch fish close to shore, but venturing into the ocean will provide you with various spots to catch a host of different sea creatures. The act of fishing is akin to Animal Crossing, you wait for the fish to bite your lure before hauling it up. It is however not so simple, because the fish fight a little. The key to success is pulling the fish from the opposite direction it is swimming in, while using the line-pulling mechanism, which allows you to quickly pull a fish. This move should be used sparingly though, as overuse can see the fish come loose.

Moonglow Bay has fish of all shapes and sizes in three categories, and to catch them all you need to use different types of lures and baits. Each type of fish offers a slightly different challenge when catching them, but I’ve never felt they were so different. Lower quality bait can be crafted by catching sand fleas with your net and cooking them in your kitchen. This bait catches small to medium sized fish. The high quality baits allow you to catch medium to large sized fish, which are the fish you’ll want to get practical profit from. As the story progresses, you will also have access to different fishing rods, which will help you more in catching particular categories of fish. Despite the perceived depth, the overall experience of catching fish never seems so different. Rod fishing also starts to get more tedious as the experience goes on, especially when you can use your net to catch multiple fish at once in seconds.

After fishing all day, you’ll probably want to head to the kitchen to cook up what you caught. As long as you have the fish needed to cook a specific meal, as well as enough money to cover the cost of non-seafood ingredients that automatically appear in your refrigerator, you can craft it by completing a series of small mini- games. These tiny mini-games are basically quick events where you have to do things like chop and boil your ingredients according to the on-screen event. The more mistakes you make while preparing your meal, the lower quality your meal will be, which will affect its selling price. Once you’ve cooked up a storm, placing all of your meals in the vending machine in front of your house will eventually see them purchased by the locals of Moonglow Bay, with the profits automatically deposited into your account.

Money earned from your fishing and cooking adventures can be spent on things like upgrades for your boat and food stall, while most will likely be spent renovating Moonglow Bay. Renovating areas of the city can be achieved by finding the renovation panel next to a building and paying the necessary costs for the renovation. Some upgrades are required to complete story quests, while others are optional and can net you handy rewards such as a lure that can catch two fish each time. Donating fish to the museum can also be done if you want to fill out your fishing log and find out more about the species you catch, such as the type of lure you need.

Moonglow Bay’s gameplay feels engaging and entertaining to begin with, but its simplicity quickly erodes much of the positivity, resulting in a gameplay loop that feels monotonous. You can only experience the cooking mini-games a certain number of times until you’ve seen them all, which makes all the other instances seem like a waste of your time. Making the cooking minigames skippable after a while would no doubt have alleviated those frustrations, but ultimately there should have been more variety in those sections. The same goes for the fishing process, as few changes in fishing encounters throughout the game.

There’s a co-op mode that allows for easy co-op play, with the second player essentially being a handy buddy who can help you fish and cook. They can cook and fish similarly to the main character, their efforts helping to line the host’s pockets with more money.

Having the option to play alongside a friend in local co-op mode might make the experience enjoyable a bit longer if you have a friend willing to chill out at Moonglow Bay with you, but that doesn’t solve the fact that it there just isn’t enough variety to keep the game entertaining. This does, however, allow recipes to cook faster, which is a welcome benefit.

Worse still, it’s arguably one of the buggiest indie releases I’ve ever played. Throughout my travels in the bay, my rod got stuck in the water on several occasions, while still being able to cross land while driving my boat. Some issues were visual only and didn’t interfere with gameplay, while others broke the game to the point where I had to restart from the last saved save. I even had a bug where a side quest that required me to talk to a particular NPC couldn’t be completed. While the odd bug can be forgiven to some degree, Moonglow Bay’s rap sheet is expansive and borderline unforgivable for a game of its straightforward nature.

While Moonglow Bay initially draws you in with its sleek voxel aesthetic, emotional narrative setup, and relaxed gameplay loop to catch, cook, and restore the titular town to its former glory, it too often finds itself bogged down by repetitive mechanics and an overwhelming amount of gameplay. unacceptable immersion breaking bugs. Couple these issues with the fact that the level of customization is rudimentary compared to other games in the genre, and it’s quite clear that there are plenty of other titles out there that improve on this style of play. I wanted to like Moonglow Bay, and at the At first I thought so, but my desire to stick with it faded much faster than expected.