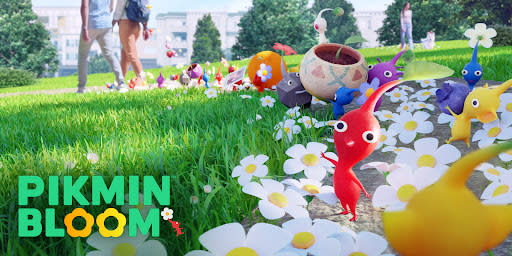 Niantic announced yesterday that its next augmented reality mobile game will be Pikmin Bloom, a collaboration with Nintendo. The free-to-play game is now available for iOS and Android in Singapore and Australia, but will roll out worldwide in the coming days.

Like Pokémon Go, Pikmin Bloom will encourage players to go out and explore their neighborhoods. Only now, instead of catching Pidgey and Rattata, you will collect seedlings and create a team of Pikmin. The more you walk, the more Pikmin you will collect. These hybrid plant-animal creatures come from Nintendo’s strategy and puzzle game franchise of the same name.

Pikmin Bloom marks the sixth installment in the Pikmin video game series. There are many different types of Pikmin to interact with, and walking alongside them will leave behind trails of augmented reality flowers. Based on the in-game footage in the announcement video (see above), it looks like you can customize your avatar as a Mii.

Another feature borrowed from Pokémon Go is the monthly Pikmin Bloom Community Day events. In the former case, players are drawn outside with special bonuses and rare Pokémon presented once a month, encouraging people to go out and befriend other players. Niantic has not released details, but the company said it will also hold monthly community day events for Pikmin to plant and play together.

Pokémon Go has a weekly pop-up on Monday morning that shows you how far you’ve traveled that week. But Pikmin seems more specifically meant to encourage movement, showing the routes you’ve taken and the steps you’ve taken at the end of each day.

The last time the two companies released a game together, it broke expectations – so no pressure for our floral friends. Even though Pokémon Go doesn’t feel as ubiquitous as it did in the summer of 2016, it is making Niantic more money than ever before, grossing over $ 1 billion in 2020. But it doesn’t look like there is. as much to do in Pikmin Bloom as there is in Pokémon Go or Harry Potter: Wizards Unite. So this game could be aimed at a more laid back crowd that just wants to see some pretty pixels as they walk – no brilliant chase coordination and raid combat here … at least not yet.