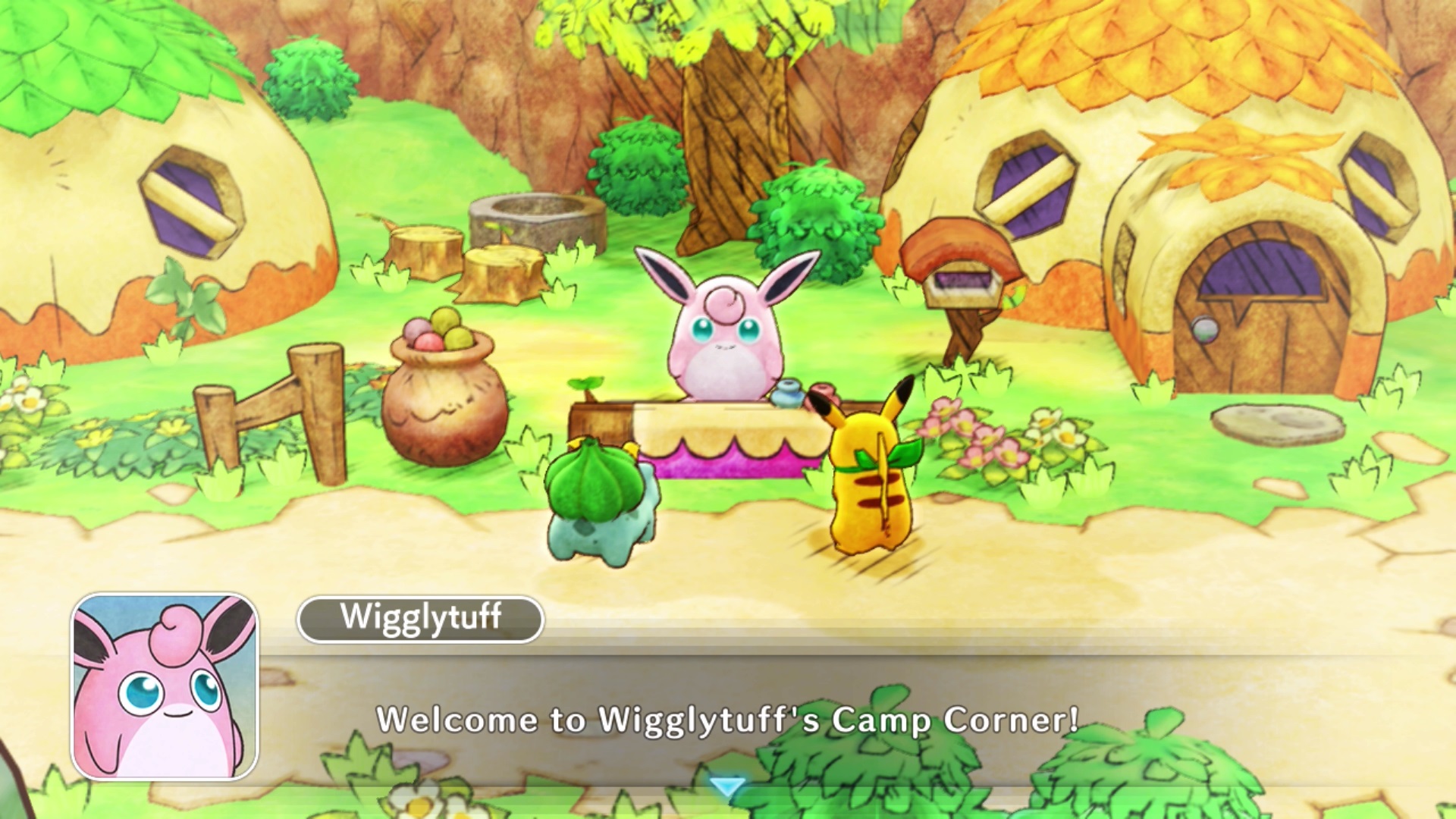 While many do not know it, the Mystery Dungeon moniker is actually its own meta-franchise. These tile-based Japanese roguelike titles from Chunsoft (now Spike Chunsoft) started with a dragon quest derived title (Torneko’s Great Adventure) in 1993. Today, the franchise has branched out to include an original series (Shiren the Wanderer), a Final Fantasy spin-off with Chocobo, two Etrian Odyssey titles, and of course, Pokemon. While each game will feature a setting inextricably linked to its associated game world, the core mechanics of each Mystery Dungeon title are relatively similar: find the objects, find the stairs, reach the end of the dungeon and expect severe punishments in case of failure.

And therein lies what I suspect to be the core of the problem – at least for players outside of Japan. These games are a whole different genre, and while the philosophy of “collect them all” is undoubtedly still present and achievable, the level of challenge in terms of risk and reward is nothing short of daunting. And for the few of us who are die-hard fans of the Mystery Dungeon games, it is generally accepted that the Pokemon entries are some of the easiest to complete, at least for the main plot. Therefore, Pokémon Mystery Dungeon: Rescue Team DX straddling the fence for uninitiated fans of the Pokemon games that will find it too hard and Mystery Dungeon fans who will find it too easy.

The target audience is therefore a little vague, a little ill-defined. So what? Is the game still fun to play? Clearly some people think so, because the Pokemon Mystery Dungeon has five main entrances, most of which have been located! In fact, this very title is a remake of the first game in the series: a blue/red duo released in 2005. Pokémon Mystery Dungeon: Red Rescue Team was a Game Boy Advance exclusive, and its almost identical pair Pokémon Mystery Dungeon: Blue Rescue Team was exclusive to the new Nintendo DS. The series has seemingly seen nothing but improvements since that first outing, though I’ll admit I’m going at it blind. I have a lot of experience with Shiren the Wandererbut this is the first time that I go deeper into what I will now abbreviate as PMD.

In each PMD, the game places you as a human being who, for some unknown and mystical reason, has turned into a Pokémon. The circumstances surrounding this transformation are different in each game and are often central to the game’s plot. DX Rescue Team, you have no idea how you became as you are, but that there is some kind of prophecy or legend about a human who became a Pokemon. Whether or not this caption specifically refers to you remains to be seen. What is evident, however, is that on your verdant island, natural disasters are occurring at a dangerous and accelerating rate. Your fellow Pokémon keep getting trapped in various locations for various reasons. Under the right circumstances, you and the first Pokemon that found you stranded on the island decide to join a special league on the island known as “Rescue Teams”. The name tells the story: sometimes creatures need rescuing, and it’s up to you to accomplish it.

These rescues, along with certain circumstances in which you can impress Pokemon in battle, are how you “catch them all” in PMD. And while DX Mystery Dungeon is a remake of games from the third generation of Pokémon games (and yes, all 386 of those three people are available to recruit!), there are a handful of additions specific to this remake. Most of them come in the form of new evolutions such as Eevee’s Glaceon, Leafeon, and Sylveon forms. However, Lucario (and Riolu) also make an appearance in the game. As such, the gameplay loop is fairly straightforward, despite being story driven for the first 20 or so hours. A specific Pokémon must be rescued. Under various circumstances, other rescue teams have failed (or actively compete with you when descending into a cave or climbing a mountain). You and your team make their way to the end, occasionally fighting a boss and rescuing the poor trapped Pokemon. Rinse and repeat! Many, many times.

What makes repetition so fun is the secret of Mystery Dungeon formally itself. The deceptively simple movement patterns, the many items and their specific uses, the struggles with scarcity, and the risk of losing it all if you fail. I could say more paragraphs, but people like me, John Tucker, and Robert Steinman (see game review links above) have already done this in detail. The notable change to PMD is the shift in focus from gear to upgrading and skill changes. The PMD is also more partisan than others Mystery Dungeon games, allowing teams of up to eight – three of your actual team, and up to five you can save and recruit from any given dungeon. In this way, it is resource-intensive.

And, dare I say, anyone who knows their stuff will find it quite easy. Really, painfully easy. It might sound like a boast, but the fact is, I’ve accomplished everything in the game except putting together a max rank rescue team (because it’s a huge waste of time). I died exactly once in the hardest post-game dungeon (Purity Forest, 99 floors with no items, level reset, no teammates). Here’s the thing, though: I’m not bragging. I’m frustrated because the thrill of risk/reward in a roguelike is entirely lost when the risk is so low.

Even as I write this, I am reminded of watching friends and loved ones play PMD games over the years and die, over and over, in the same dungeon. Persistent perks (leveling up, using stat-up items, recruiting high-level Pokemon) won’t make up for a lack of background knowledge. And if you ignore those tutorial screens and don’t care to learn how the game works, you might fail. And I guess that’s right? It’s not exactly an intuitive experience. One could say that the strength/weakness system of the base Pokemon franchise is more intuitive, but only marginally. Still need to memorize! If I put aside my double-edged complaint about the difficulty level, I can safely say that the game is still a joy to play; the thrill of facing a boss at the end of a 30-story dungeon with a motley group of creatures down their last bay of oran? Invaluable. And although I never died, I must confess to a few close calls. Good effort, Deoxys!

In terms of game design and control, I found the UI and button layout for this Switch input in the PMD series to be near perfect. It doesn’t take long to drop shortcut windows, locking mechanics, autorun, party AI features, and customization options to camp. Honestly, comparing how Spike Chunsoft handles PMD games and how Nintendo itself handles menus, say, Pokémon Sword and ShieldI’m convinced in my review that the PMD developers think more clearly about menu navigation than the main developers of the series.

Aesthetically, Pokémon Mystery Dungeon: Rescue Team DX delivers a beautiful palette of colors and sounds. The developers have used a specific form of colorization for the Pokemon in cinematic events where one or more color layers are pre-determined for that entity. Then, instead of a solid or gradient fill, there’s some sort of intricate, colorful layer behind the Pokemon. It looks a bit jarring when the Pokemon (say, Zapdos) flaps its wings, and while the drawn black borders move, the yellowish color inside stays still. It’s trippy, but I’ve heard people criticize this method for being lazy. I hear that, but I also note that there are over 400 Pokemon in this game, along with dozens of environments and hundreds of battle animations. I feel like the art is above “adequate”.

As for the music? My only complaint is that there is no soundtrack released with this game! In fact, there hasn’t been a single musical release for the entire PMD series. The closest thing in the entire series was actually to this game: a promotional giveaway run by the official Pokémon Twitter account in early 2020, featuring seven songs from the game, pressed on vinyl and CD. Nintendo made and distributed ten of them, and that’s it. Can you detect my boiling blood from miles away? Of course you can. The music of these games, and more particularly in DX Rescue Team, is really nice! There are many simple and relaxing environmental themes, both for the city center and the many dungeons. There are also fun and intense combat themes! Even the simplest melodies, like the one used in your main character’s dream sequences, are imprinted in my mind as something I want to hear over and over again. So, uh… dear Nintendo, Pokémon Company and Spike Chunsoft: if it’s not too much to ask, how about a digital compilation or a box set for all Pokemon Mystery Dungeon music? Pretty please? I already made my wish to Jirachi for this one!

All told, even with the weird medium difficulty that makes this one hard to write, I still think Pokémon Mystery Dungeon: Rescue Team DX is a fun game to play. The post-game can be somewhat monotonous, but the main story keeps things going. Seriously, the plot is simple, but the dialogue between all of these Pokemon makes for a great experience. The blend of mature themes – life and death, protection and abandonment – ​​with the childlike wonder of all things Pokémon keeps the mind focused on the quest’s goal, even when the quest itself is a heavy strain (or a mere frolic) for some players. If you haven’t tried yet Mystery Dungeon games but want a better understanding, this could be a great place to start! If you have played other Pokemon Mystery Dungeon entries and enjoyed their balance of challenge and storytelling, you’ll probably enjoy this remake of the one that started it all.