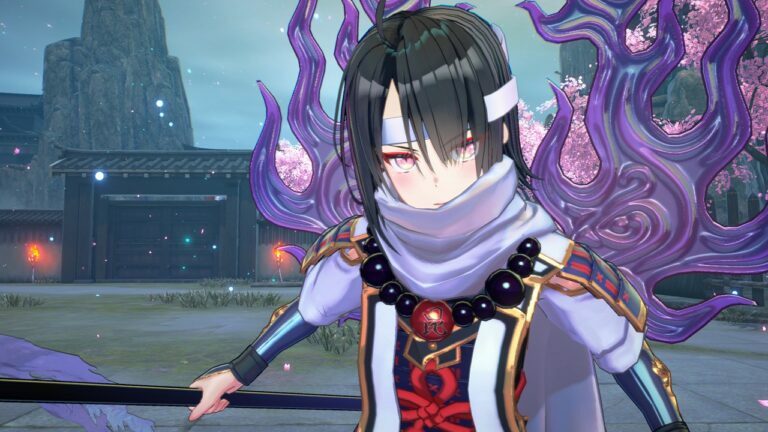 Publisher D3 and developer Shade have announced that Samurai Maiden will be coming to Switch in Japan on December 1, 2022, followed by a worldwide release on December 8, 2022. This news was accompanied by a second trailer, which you can check out above.

Samurai Maiden will get a physical Switch release in Japan, but the title will be digital-only in the West. The first copies printed in Japan will include a download code for the “Sailor Suit Gal” costume, and a separate code for the opening theme song “Divine Tuning” and the ending theme song “Kotonoe Ni Saku Ver”.

Finally, the official Samurai Maiden website has been updated with details on some of the characters you’ll encounter. Check out the screens and profiles below.

A renowned military leader of the Sengoku period, Nobunaga Oda. Upon encountering Tsumugi in Honno-ji as he burns around them, he is initially suspicious of the oddly dressed woman. But with no other way to escape the hordes of undead surrounding them, he offers her a magic katana and asks her to join the fight. Broad-minded but temperamental, Nobunaga can show glimpses of kindness behind his ruthless savagery, earning the enduring loyalty of his ninja subordinate, Iyo. It seems that he is determined to live for a great purpose…

A renowned military leader of the Sengoku period, Shingen Takeda, as she appears in the Underworld. Although friendly and fun-loving, her combat prowess is undeniable. She constantly seeks to prove herself, often resorting to violence with childlike naivety. Although she has continued her rivalry with Kenshin Uesugi in the underworld, she can’t stand the constant scolding. That’s not to say Shingen can’t do it herself, like when she provokes Komimi by treating her like a child.

A renowned military leader of the Sengoku period, Kenshin Uesugi, as he appears in the underworld. This vision of beauty may be carried with graceful dignity, but it cares no less about what others have to say. Righteous in her benevolence, she ignores the wishes of others and sets out to “save” them as she sees fit. Although Kenshin works as a peacekeeper in the underworld, her rivalry with Shingen continues unabated. With a tendency for quick judgments, she declares Hagane a shameless evildoer when they first meet just because of his outfit.