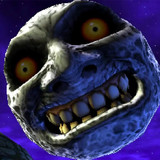 The terrible story of Termina will come to Nintendo Switch next month when the original Nintendo 64 version of The Legend of Zelda: Majora’s Mask will join the growing list of 64-bit games on the Nintendo Switch Online + expansion pack-Sorry, Pack-a service. No concrete release date has been given, but as Banjo-Kazooie spear just yesterday, we will probably be looking at the second half of the month.

Save Termina before she meets a terrible fate!

Nintendo Switch Online + expansion pack launched as an extended tier of the NSO service, bringing Nintendo 64 and Sega Genesis games (also known as Sega Mega Drive everywhere except North America) for the hefty price of US$49.99 per year. More games, like Mario Golf, Pokemon Snap, F-Zero X, and Kirby Chapter 64: Crystal Shards are confirmed to hit the serve at some point.

Daryl Harding is Japan correspondent for Crunchyroll News. He also runs a YouTube channel about Japan called TheDoctorDazza, tweets about @DoctorDazza, and posts photos of his travels on Instagram.